Visiting Al Qarah Mountain in Al Ahsa, Saudi Arabia, was one of the first things I added to my Saudi itinerary. The reasons are pretty simple: it’s relatively close to Dammam, where I landed, and it is a spectacular place that should not be missing from your trip to Saudi Arabia.

The Al Qarah Mountain is part of Al Ahsa, a region of Saudi Arabia, known for its huge oasis of palm trees, dates, pleasant climate, and spectacular geological formations, which seem to be carved by human hands but they’re not.

Al Qarah took its name from a nearby village and is actually a hill, as it has a maximum height of 210 meters above sea level and an area of about 1400 hectares.

Besides the strangely shaped ridges, Al Qarah Hill hides inside caves and passages you can cross when you buy a ticket for the Land of Civilization park.

PIN IT FOR LATER 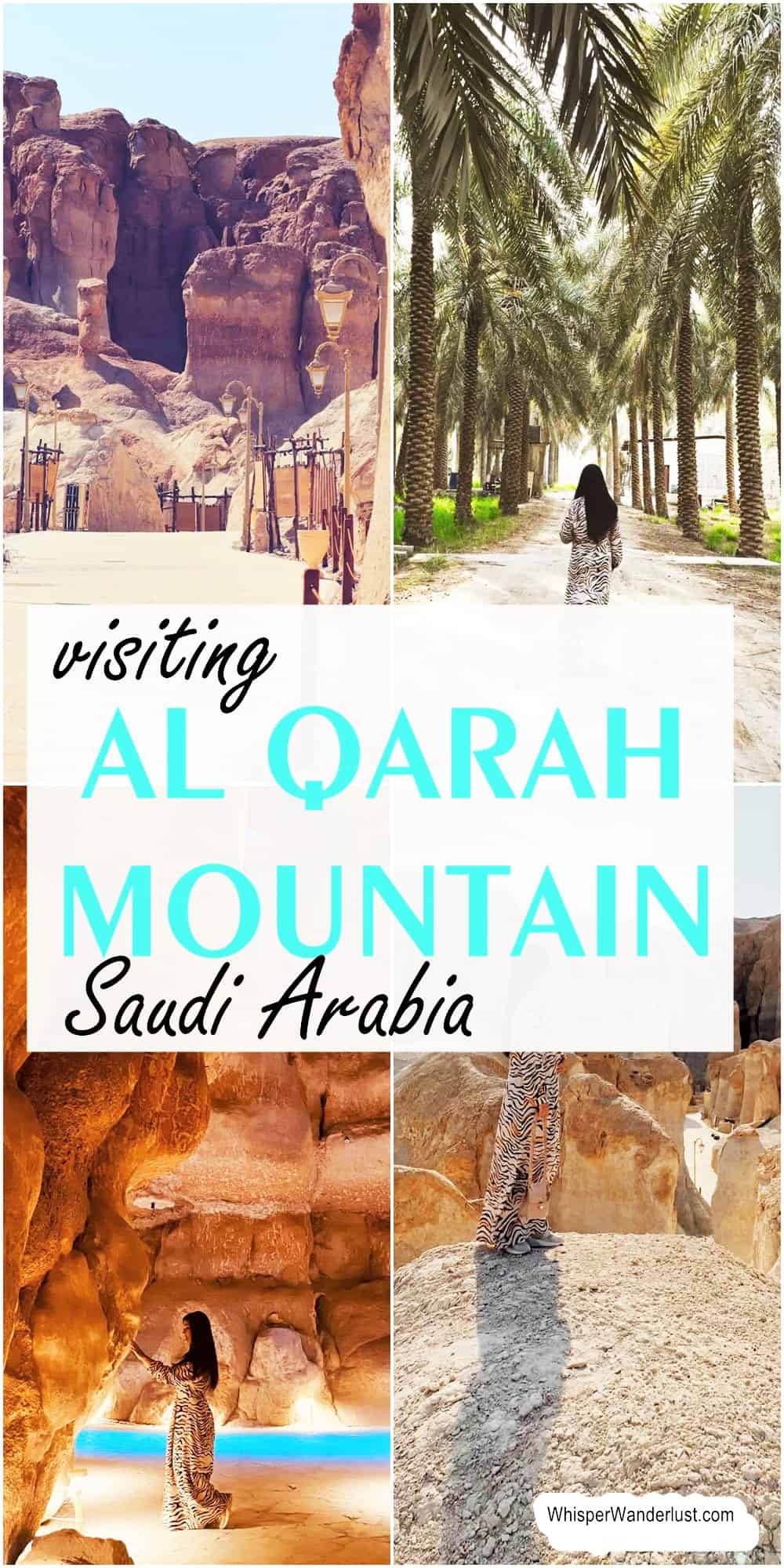 They were formed in several ways. Since we are talking of limestone, winds and precipitation have easily eroded the hill and given these disproportionate but beautiful volumes and shapes, so attractive for the human eye.

Furthermore, collapses, rivers and even earthquakes lead to an even more substantial relief deformation. All this set of natural phenomena resulted in a real visual spectacle. As a geological structure, Mount Al Qarah resembles the relief of Cappadocia and the Bryce Canyon in the USA or Petra in Jordan and Al Ula in Saudi Arabia.

As part of the UNESCO World Heritage Site, the space inside and around Al Qarah Mountain Hofuf has been arranged so that the visit is interactive, safe, and carried out in the best conditions. This is my conclusion if I were to make a short review of my trip here.

Therefore, to visit, you need to buy an entrance ticket inside the Land of Civilization museum where you will also find some things about Al Qarah Mountain history. The Jabal Al Qarah ticket price is 50 SAR and includes both the mountain itself and a mini-exhibition, proof that tourism in Saudi Arabia is developing. Here is where you can better understand the history of the place and see some objects discovered in the area by archaeologists.

They say that the place is so good for living that traces of civilization older than 7000 years have been discovered in the area. And when I say good, I mean the oases with palm trees that produce dates (estimated about 3 million palm trees here), the underground springs, and, of course, Al Qarah cave and the hills in the area, which provide shelter and a comfortable temperature throughout the year.

I can certainly confirm that the temperatures inside the mountain canyons are pretty different from those outsides. In summer, it’s cooler, and in winter, it is a little warmer.

READ ALSO: Trip to Edge of the World in Riyadh, Saudi Arabia

How much time do you need to visit Al Qarah Mountain?

To visit the mountain, you don’t need more than 2, 3 hours. The passages inside have a total length of about 1.5 kilometers, and you don’t have many things to do apart from exploring, admiring, and photographing them from all angles. After you have done this, climb the hill and notice the relief from the top. In the distance, you will see a sea of palm trees.

Walking among the narrow cliffs is a pleasure, especially as the light intertwines beautifully and creates various designs on the limestone walls. Some pigeons have made their homes here, and the quiet is sometimes interrupted by the flapping of their wings.

How to get to Al Qarah Mountain?

Al Qarah Mountain is located in the Eastern Province of Saudi Arabia, near Hofuf, Al Ahsa region. To get here, you have several ways, depending on the area you are coming from.

Hofuf also has an international airport, so this will not be a problem if you want to land directly in Al Ahsa when you visit Saudi Arabia. By car, you make about an hour and a half from Dammam and 3 hours if you come from the capital Riyadh. Land of Civilization Park has free parking.

Another way to get here is by train. It covers the distance from Dammam in an hour and a quarter, the price of a ticket starting from 87 SAR (100 lei). You can also come by train from Riyadh or by bus, but the train is a faster way to travel, even if the highways in Saudi Arabia are well developed.

Public transportation within cities is almost non-existent in the largest country in the Arabian Gulf, so to get around, you will have to choose a ride-sharing company if you don’t want to rent a car. The most popular in the kingdom is the Careem app, but Uber also works.

There are many stories and legends about Al Qarah Mountain and the events that have taken place here. But the most interesting are the ones that talk about Judas and the fact that here he would have decided to end his life after betraying Jesus. However, I think it remains at the stage of legend, and that’s it, considering the very long distance from Jerusalem. However, if you search Judas Cave-al Qarah Mountain, you may find some interesting details about this legend.

Besides the hill and the oasis of palm trees already mentioned, Al Ahsa oasis has many other things to offer. Ideally, you should spend at least 3 days in the area, but only if you have a minimum of 3 weeks itinerary for Saudi Arabia. Otherwise, other places in the country are worth seeing.

However, if you decide to stay here for at least 24 hours, these are the places I recommend you see in Al Ahsa:

How to get a tourist visa for Saudi Arabia?

By the end of 2019, it was almost impossible to get to Saudi Arabia if you did not have an employment contract here or if you were not Muslim, in which case you could enter the country to participate in the Mecca pilgrimage.

Two years later, it’s effortless to obtain a tourist visa for Saudi Arabia if your country is among the 49 eligible countries. You can see the list here. Also, here you will create an account, and you will start filling in the application form. You need a passport picture, the amount of 480 SAR on the card, and the passport data.

The visa costs 480 SAR (550 lei) and also includes COVID insurance. It is valid for one year and allows a maximum stay of 90 days with multiple entries. At this time, to visit Saudi Arabia, you need a visa and a vaccination certificate. Once in the country, you have 8 hours to download an application called Tawakkalna, required to enter any space.

Where to stay in Al Ahsa?

There aren’t many accommodation options in the area, but you don’t need more than two days to explore the place. Ideally, you will find accommodation in Hofuf, the largest city near this tourist attraction and the place where you will indeed have enough restaurants to dine.

My suggestions for hotels in Al Hofuf are:

When is the best time to visit Al Ahsa?

Although the temperatures inside the passages in Al Qarah are bearable at any time of the year, you will want to avoid summer if you’re going to hike up the hill.

Late spring and autumn are perfect for exploring the Saudi kingdom, whether we are talking about the east coast, the west, or even the country’s center. Winter is also a good idea, but you should expect reasonably low temperatures in some areas.

I recommend visiting this mountain in Saudi Arabia, especially since the place is still not very touristy and you can enjoy everything it has to offer. I was impressed, and I can place it at the top of the ten most beautiful places to visit in Saudi Arabia.

by Bella
Leave a comment
Raluca Belu aka Bella, a 28-year-old travel writer, Pisces, studied Geodesy and GIS, in love with maps, road trips, dogs, and nature. Follow me around the world :)